Groovy Tuesday: “Float On” By The Floaters

The Analog Kid Blog first featured “Float On” back in December of 2013 on a Groovy Tuesday blog about the great songs of 1977, but that entry featured the edited 7″ single cut. That minimalist version of “Float On” was good enough to reach #2 on the Billboard Hot 100 chart for two weeks in September of 1977, yet it pales in comparison to the smoldering full-length album version.

“Float On” may have been the only hit song for The Floaters, but don’t feel too bad for Ralph, Charles, Paul, and Larry. They may have been kept from the prized #1 slot by tracks from Andy Gibb & The Emotions, but there’s no shame in losing out to songs written by Barry Gibb and Maurice White. Besides, “Float On” somehow managed to encapsulate everything that was so awesome about the ’70s into one twelve-minute smorgasbord of sensuality. Even Barry Gibb and his fabulous chest hair had to be impressed…

From the album Floaters

Andy Gibb: “I Just Want To Be Your Everything” (Barry Gibb)

From the album Flowing Rivers

I Just Want To Be Your Everything 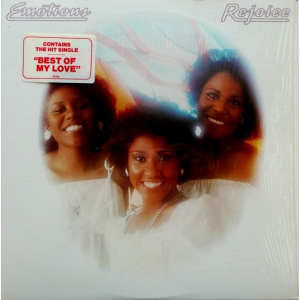 The Emotions: “Best Of My Love” (Maurice White/Al McKay)

From the album Rejoice

Best Of My Love

Posted by The Analog Kid on February 10, 2015 in One-Hit Wonders, Pop, Soul/R&B and tagged Analog Kid, Andy Gibb, Barry Gibb, Best Of My Love, Float On, Floaters, Groovy Tuesday, I Just Want To Be Your Evrything, Maurice White, The Emotions.