Performance analytics (sorry, you can take the guy out of QA, but you can’t take the QA out of the guy!) tell me that a blog I posted last October about the Bangles is one of my most-viewed entries. That blog tells the story of how I discovered the band– read it now if you’d like!

That post also contained a number of rare Bangles b-sides, but I didn’t include any tracks from the Bangles’ first EP because I always knew I would devote an entire blog to it someday. Well, today is that day! I ripped a brand new copy of the EP a few days ago with my fabulous new set-up, and I think the results sound pretty amazing. Bangles has never been released on CD, although three of its tracks did appear on a 3″ CD single in 1988. I bought my vinyl copy of the EP in early 1986 at the old Waterloo Records in Austin, and I recorded the tracks onto the same TDK SA90 that already had All Over The Place on one side and Different Light on the other. That tape didn’t leave my car for about three years– in fact, I think it was actually in my ’79 T-Bird on the day that an electrical short burned it to the ground while I was inside a club. Good times!

Bangles was originally released in 1982 by Faulty Products, and was later reissued by IRS Records. The EP contained four original Bangles songs, and also included a great cover of the La De Da’s 1966 classic “How Is The ir Up There.” Original bassist Annette Zilinskas played on the EP, but she left after its recording to join the cowpunk band Blood On The Saddle. Former Runaway Michael Steele joined the band shortly afterwards, and the classic Bangles lineup was finally in place.

Bangles doesn’t quite measure up to the jangle perfection of All Over The Place or the pure pop sheen of Different Light, but it’s still a great debut from a band that remains one of my all-time favorites.

How Is The Air Up There? 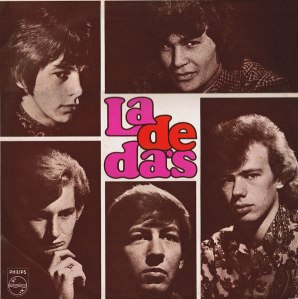 The La De Da’s: “How Is The Air Up There?” (DuBoff/Kornfeld)

From the album La De Da’s