The Lost Boys: Hard-To-Find ’80s Albums (“The Politics Of Dancing” by Re-Flex)

“The Lost Boys: Hard-To-Find ’80s Albums” gives you exactly what the title implies: a rare or out-of-print album or EP from the ’80s in its entirety. Some will be from CD, but most will have been lovingly transferred from pristine vinyl culled directly from the Analog Kid’s vast collection. Whatever album I choose, it will be one that you can’t easily find a physical copy for sale on Amazon or in your local record store (if you even have one anymore). Death…by stereo!

Re-Flex is a classic ’80s one-hit-wonder story. They released one album. They had one (big!) hit. And then they went away. It’s a shame, too, because The Politics Of Dancing is a fantastic synth-pop record and I really would have liked to have heard more from Re-Flex. The band did actually record a follow-up album entitled Humanication, but it was shelved before its release by EMI and remained in the vaults until 2010. I haven’t been able to track down a copy of that release yet, but I’m still looking…

The Politics Of Dancing was briefly released on CD in the early ’90s, and copies now routinely sell for more than $100 on eBay and Amazon. You can’t even download the mp3s, so hopefully its presence here on the Analog Kid blog will allow at least a few more people to discover this lost ’80s classic! 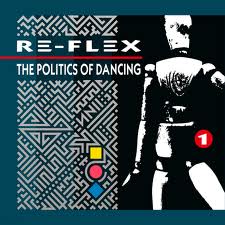 Re-Flex: The Politics Of Dancing

1. “Praying To The Beat” (Baxter/Craig/Fishman/Kerridge)

Praying To The Beat

5. “The Politics Of Dancing” (Fishman)

The Politics Of Dancing

6. “Something About You” (Fishman)

The Politics Of Dancing [Single Version]

Posted by The Analog Kid on February 19, 2014 in Alternative, New Wave and tagged Analog Kid, Re-Flex, The Politics Of Dancing.