Did you know that it’s only NINE days until Christmas?? I just realized this. I don’t have a real job at the moment, so I often find myself losing track of time. To me, it feels like mid-November right now; however, the Christmas tree that my wife put up in our living room yesterday tells a different story…

I suppose that I must be honest: I’m kind of a Scrooge. That’s not really a secret to anyone who knows me. I’m not sure exactly where my anti-Christmas crusade began, but I believe its origins may be traced back to Christmas Eve of 1992. That was the night my band members invited me out to TGI Friday’s in Plano for a drink, and proceeded to fire me. Did I mention that one week later, I was scheduled to check into Baylor Medical Center to undergo a life-saving bone marrow transplant? Did I mention that they fired me on Christmas Eve?

OK, so I guess the truth is that it’s pretty damn clear where my pseudo-hatred of Christmas comes from. My anti-Xmas feelings have subsided a bit in recent years, and I am happy to say that there are things I actually enjoy about the holiday again. Take these guys, for example: 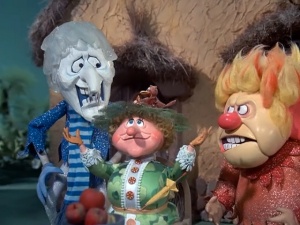 Forget Frosty and Rudolph and the Grinch– Heat Miser and Snow Miser rule Christmas at the Analog Kid’s house. It’s not the holidays without them, so I’d like to share their classic songs with you. I’d stay and listen, but I gotta run to the mall. It’s nine days until Christmas, and I haven’t done shit for shopping!

Posted by The Analog Kid on December 16, 2013 in Holiday and tagged Analog Kid, Heat Miser, Snow Miser, The Year Without A Santa Claus.