July 13, 1974: my seventh birthday. I don’t recall the details of the day, but if I had to guess I would bet that my parents took me to Farrell’s Ice Cream Parlour at Valley View Mall in North Dallas. It was my favorite place in the world in 1974.

Mmmmmmm…stick candy. The Zoo. Player pianos. Yeah, I’m pretty sure I was at Farrell’s that day. If not, I was throwing one hell of a birthday tantrum!

Elton John: “Don’t Let The Sun Go Down On Me” (Elton John/Bernie Taupin)

From the album Caribou

Don’t Let The Sun Go Down On Me

I have mentioned before that Elton John’s Greatest Hits was the very first rock album that I ever purchased with my own money, and of course this classic track was on it. Elton’s original version of “Don’t Let The Sun Go Down On Me” peaked at #2 a few weeks after my seventh birthday, and the song finally reached #1 in 1991 when Elton recorded a live version with George Michael.

From the album Sundown

“Sundown” had been the #1 single in America two weeks earlier, capping a remarkable slow rise to stardom for Canadian singer/songwriter Gordon Lightfoot. My parents always had Lightfoot’s albums around the house when I was growing up, and “Sundown” has always been one of my favorite songs.

Gordon is 75 years old now, and he still tours frequently. I saw him on the Jimmy Fallon show earlier this year, and he played a version of “If You Could Read My Mind” that almost made me cry. 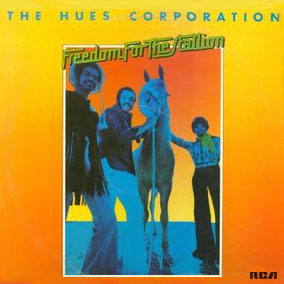 From the album Freedom For The Stallion

“Rock The Boat” wasn’t even the first single from The Hues Corporation’s Freedom For The Stallion, and it took months of club play for it to make an impact. Once Top 40 radio finally caught on, “Rock The Boat” shot up the charts and finally reached #1 the week before my birthday.

Elton John’s Greatest Hits may have been my first album purchase, but this K-Tel compilation couldn’t have been far behind:

From the album Back Home Again

Celebrity deaths don’t usually hit me too hard, but I was absolutely crushed when John Denver died. My little sister played his albums non-stop throughout my childhood, so I know every nook and cranny of his catalog by heart. “Annie’s Song” may just be my favorite Deutschendorf track, and Back Home Again is definitely my favorite album.

Original version from the album Rock Your Baby

Harry Wayne Casey and Richard Finch would go on to have multiple #1 singles with their own band, but it was “Rock Your Baby” that established the duo as songwriters and laid the groundwork for the future success of KC & The Sunshine Band (and disco in general). Casey and Finch recorded the demo in an hour, but Casey found the song too high for his voice. They decided to give the song to George McCrae, and the rest is disco history. Rolling Stone magazine named “Rock Your Baby” the #1 song of 1974.

From the album Sit Down Young Stranger

If You Could Read My Mind