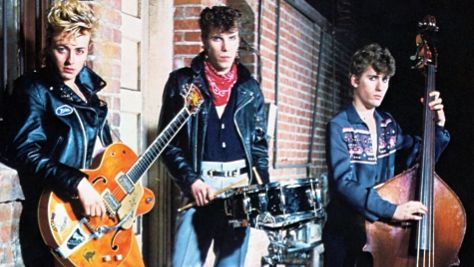 Rant N’ Rave With The Stray Cats has always been my favorite Stray Cats album. Rant N’ Rave was the band’s second U.S. release (the third internationally), and the LP somehow managed to be both nastier (“How Long You Wanna Live, Anyway?”) and yet more sophisticated (the gorgeous “I Won’t Stand In Your Way”) than its predecessors. The album may not have been as successful as Built For Speed in America, but it’s still the Stray Cats album that I go back to the most often.

I bought my CD copy of Rant N’ Rave during the summer of 1989, and I had to search pretty hard to find it. That U.S. pressing is now long out of print, although you can still shell out some big bucks for an import copy if you want. One word of warning, though: according to many reviewers on Amazon, the import version actually beeps the word “ass” during the album-opening “Rebels Rule.” What, is this still 1989 and we’re watching Ghostbusters on TBS?

Well, I can promise you that there is no unnecessary censorship in the copy of Rant N’ Rave that I have shared below–it’s a beautiful 320 kbps rip from that original U.S. CD pressing. I’ve also included all of the Stray Cats’ b-sides from the era in the bonus tracks section. You know what? I got a strange, sneaking suspicion that this post will prove to be one of my most popular entries on The Analog Kid Blog…

3. “Look At That Cadillac” (Brian Setzer)

Look At That Cadillac

Something’s Wrong With My Radio

I Won’t Stand In Your Way

How Long You Wanna Live, Anyway?

From the U.S. LP Built For Speed 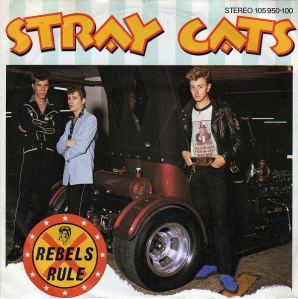 Stray Cats: “Lookin’ Out My Back Door” (John Fogerty)

From the German 7″ Rebels Rule

Lookin’ Out My Back Door