Here’s your ticket to some of the best (or, perhaps, most infamous) 7″ singles ever released! No adapter is required, although in my opinion the device pictured below is right up there with Galaga as one of the best inventions of the 20th century.

Last night, I attended my third concert on Fleetwood Mac’s “On With The Show” tour. I was lucky enough to make it up to Minneapolis last September for the band’s first show with Christine McVie since 1998, and of course I saw them when they played in my hometown of Dallas last December. The band was back in Dallas last night for another show, and I was actually going to sit this one out– thankfully, Mother Nature was on my side and wasn’t going to let me miss one of my all-time favorite bands. North Texas experienced a record snowfall last night and this morning, and the frosty forecast enabled me to pick up two lower-level seats on Stub Hub for one-fourth of their original value.

Of course, the show was fantastic– I could see this band every night and never be bored. Fleetwood Mac may be playing the same set list at each concert on the current tour, but there’s always a unique moment or two that makes each show special. My favorite moment last night happened after the band had just finished “Seven Wonders,” a song that received a lot of attention last year after it was featured on American Horror Story.  As usual, Stevie thanked the TV show for giving the song a new life and then left the stage (along with the rest of the band) as Lindsey Buckingham prepared to unleash his epic acoustic version of “Big Love.”

Lindsey always introduces the song with a little speech about how the meaning of “Big Love” has changed for him over the years (1987: alienation. 2015: healing power of change), but last night he made us all laugh when he preceded that intro with this comment:

“This next song was not featured on American Horror Story— it was more like Fleetwood Mac Horror Story.”

When Stevie came back out for “Landslide,” she chided Lindsey with “Fleetwood Mac Horror Story? Really?” Fans of the band love to discuss the seemingly ever-present tension between Nicks and Buckingham, and I’m sure some in attendance thought Nicks was upset by the comment. To my eyes, though, it was a beautifully sweet and funny moment that showed off the personal side of what Buckingham often refers to as “The Big Machine” of Fleetwood Mac. Lindsey and Stevie will always have their issues, but it’s still so clear that they share a relationship unlike any other in rock history.

That brings me to today’s post, which features what I consider to be the single best 45 release OF ALL TIME. In December of 1976, Fleetwood Mac released Buckingham’s “Go Your Own Way” as the first single from the upcoming Rumours album. “Go Your Own Way” reached the Billboard Top 10 (a first for the band) despite its rather odd structure– check out the way the acoustic guitar seemingly goes against the rhythm of the song. “Go Your Own Way” set the table perfectly for the release of Rumours, an album that would ensure Fleetwood Mac’s complete and total domination of the rock world throughout 1977/78. And that was just the a-side of the single! The flip side of the “Go Your Own Way” 45 was Stevie’s “Silver Springs,” a song that inexplicably didn’t make the final cut for inclusion on Rumours.

Think about that for a moment: Rumours was so fucking good that the band couldn’t find room for a song as brilliant as “Silver Springs.” Any other band would have made “Silver Springs” the lead single from an album– for Fleetwood Mac, it was a throwaway b-side that was almost impossible to find for more than fifteen years.

So much about the history of Fleetwood Mac can be summed up by this one little 45. Lindsey and Stevie had ended their relationship during the recording of Rumours, and both songs were clearly written about the other. The 45 is the ultimate rock and roll he said/she said moment, and that debate is still going on today. “Silver Springs” was brought back to life after its inclusion on the 1997 reunion album The Dance, and now it’s one of the band’s traditional encore songs. Stevie still turns toward Lindsey and sings it right to him– make that AT him– every night, and Lindsey sings “Time casts a spell on you, but you won’t forget me/I know I could have loved you, but you would not let me” right back at her. I still get chills every time I see and hear it, and last night was no exception. With one little 7″ record, Fleetwood Mac managed to epitomize everything that makes Lindsey and Stevie’s relationship so special.

As we exited the arena after last night’s show, we were greeted by a massive snow storm that will surely go down in Dallas lore (five inches of snow? In March?!?). The walk back to the car was beautiful, and there were definitely some flashes of blue and green in those giants flakes. I’m not sure when or where I’ll see show #4 on this tour, but I’m definitely going back again! 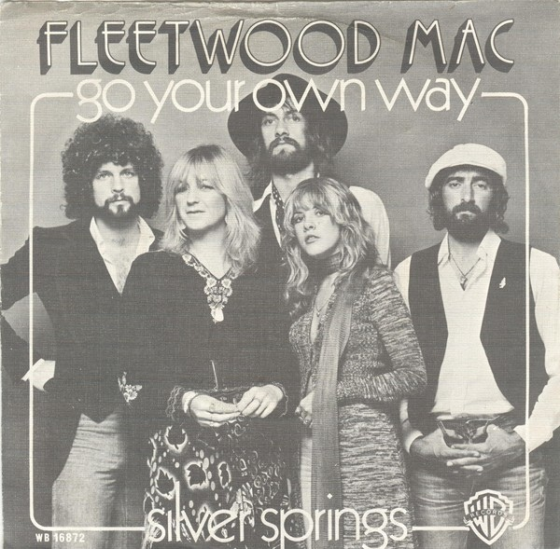 Go Your Own Way

From the album Tango In The Night

From the album The Dance

From the album Fleetwood Mac