Now that I am armed with a much-improved system for ripping vinyl, I spent a couple of hours late last night digging through my record collection in search of some gems to share with you. I found some really great stuff for future posts, but really I hit the mother lode with The Monroes. “What Do All The People Know” is right up there with Phil Seymour’s “Precious To Me” as one of the best power pop songs of the ’80s– I remember hearing it on KROQ back in 1982, and rediscovered the song when it was included on Volume 4 of Rhino’s Just Can’t Get Enough: New Wave Hits Of The ’80s series back in 1994. I found the super-rare The Monroes EP at my local Half Price Books a few years ago, but for some reason I had never ripped it. At 4 AM this morning, that all changed.

I can’t really tell you much about The Monroes because there isn’t really much to tell. The five-man band from San Diego released their one and only EP in 1982, but their Japanese-based record label decided to pull out of the U.S. market shortly after its release. “What Do All The People Know” had been steadily climbing the Billboard Hot 100, but it stalled at #59 when Alfa Records pulled the promotional plug. Sadly, The Monroes never made another record– but they did leave us with one hell of a debut. The Analog Kid hopes you enjoy this true power-pop classic!

What Do All The People Know

Somewhere In The Night 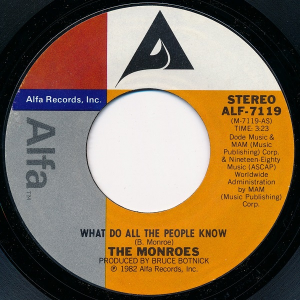 What Do All The People Know [7″ Version]

From the album Phil Seymour

Posted by The Analog Kid on August 1, 2014 in Alternative, Power Pop, Rock and tagged Analog Kid, Phil Seymour, The Monroes, What Do All The People Know.