Earlier this week, I mentioned my eccentric friend Wade in a blog post about new wave songs from 1986. Here’s what I had to say about my lovable-but-loopy pal:

My friend Wade is an unusual man. He is insanely intelligent, but won’t even go on Facebook because he is convinced the government is watching his every move. He can describe (in great detail) every goal scored by the U.S. national soccer team in the last twenty years. When I recently traveled to Kansas to attend a Longhorn football game, he spent a week trying to convince me that I absolutely HAD to visit the Mennonite Heritage Museum in Goessel, Kansas. After all, who in their right mind could visit Kansas without stopping in Goessel to see The Wheat Bell, a full-scale replica of the Liberty Bell made from turkey red wheat?

I love to kid Wade, but he’s always been one of my best friends. Back in my college days at UT, we spent countless hours hanging out in his palatial apartment. He gave us beer, he gave us food, and he gave some of us drugs (but not me, as I was a squeaky-clean Analog Kid!–mostly). His place provided us with a great environment for watching Moonlighting, L.A. Law, Max Headroom, and all of the other classic late-’80s shows. Wade’s apartment was a true oasis for this dirt-poor college student, and it was made even cooler by a certain framed print placed quite prominently on his living-room wall:

You can ignore Steve Carell, because he only came over once or twice (and the asshole always stole our HEB-brand lemon cookies). But the framed Asia poster? Oh yes, it was there. It was always there. And in my mind, it is still there.

When the original Asia reunited a few years ago, I had the pleasure of seeing them at the Dallas House Of Blues location. Of course, it wouldn’t have been right to see them without Wade. He even managed to behave himself at the pre-show meet-and-greet– I had fully expected him to tackle Steve Howe and pepper him with obscure questions about Tales From Topographic Oceans, but thankfully he was too awestruck to speak coherently. The band played an acoustic version of “Don’t Cry” that night, and its famous video was projected on a giant screen behind the original foursome. I think Wade got  a little misty.

“You know how I know Wade is awesome? Because he likes Asia!” 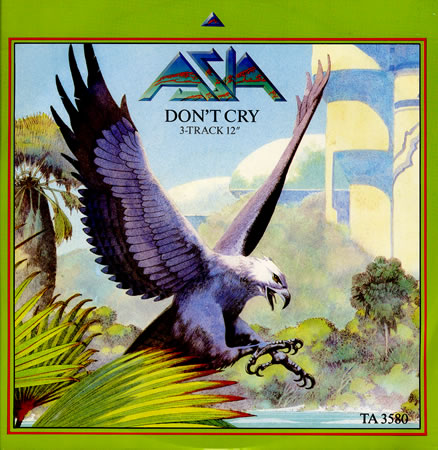 The Don’t Cry 12″ also includes the non-LP track “Daylight,” and concludes with my favorite song from Alpha: “True Colors.”

Asia: “Heat Of The Moment” (Wetton/Downes)

From the album Asia

Heat Of The Moment

From the album Tales From Topographic Oceans